Carrie Compere and the cast of the 2019 Seattle Repertory Theatre Production of Shout Sister Shout! Photo by Bronwen Houck.

As Ford’s Theatre gears up for the spring 2023 musical, SHOUT SISTER SHOUT!, director Kenneth L. Roberson and playwright Cheryl L. West had a conversation with Director of Artistic Programming José Carrasquillo. Learn about the story’s origins and what audiences can expect from this new work about the trailblazing Sister Rosetta Tharpe, who was deeply influential in rock and roll, R&B and gospel as a singer and guitarist.

FORD’S THEATRE: Tell us about your vision and your viewpoints behind this telling this story.

KENNETH L. ROBERSON (Director): I see it as a template of magic, music and memory. It’s a memory play: there are times where there’s memories within memories. I’m trying to decide what that word is — if those memories are real or not, primary memory and secondary memory.  It’s magical, about the transformative power of love and breaking barriers.

CHERYL L. WEST (Playwright): I did not want a cradle-to-grave story of “this happened, this happened, and this happened.” I challenged myself to find a different way into the piece: how memories serve us and elude us, and how we reinvent them, so they are more palatable for us to continue in our lives. The way memories converge, sometimes they bombard her, sometimes they come out of nowhere, sometimes that are pleasant, sometimes they are painful. It’s an interesting way to tell a story of a very courageous Black woman: to tell her not just in her accomplishments musically and career-wise but also a full juicy incredible woman who wanted to be happy, who wanted to experience love, who wanted so much she married three times trying to get it right.

The musical is not didactic, it’s entertaining. When people left audiences in Seattle, they were so uplifted. They were standing outside and shaking hands. I hope we have that same experience in D.C.

FORD’S THEATRE: How did the show come about?

CHERYL: When the book [by Gayle Wald] came out [in 2008], I read it and I thought this is an incredible story, it would do great onstage. I just thought her story was so dynamic. But my usual collaborators were not interested. I couldn’t get anyone to think it would be wonderful. As I’ve been at this for over 30 years, some projects are not ready, it’s all about timing…Fast forward about a decade, I was at Arena Stage working on something else. And Randy Johnson was there. And I saw his email where part of his signature was “Next up: SHOUT SISTER SHOUT! Sister Rosetta Tharpe.” And I thought, oh my goodness, that’s something I was trying to get people interested in 10 years ago. And that’s what happened.

We’ve done Pasadena, and then Seattle, and Seattle was a page-one rewrite. Pasadena was where we learned that it wasn’t the story we needed to tell. I went to Braden [Abraham, at Seattle Rep] and said, “I know how to fix it if you give me the chance.” And he said, “All right, Cheryl.” We worked on it for a year and a half, maybe two, and it was a huge success in Seattle. That’s basically the story, and I was so excited when Ford’s was interested in it. I’ve had quite a few works done in D.C.

FORD’S THEATRE: One of the things that is very interesting through the lens of the director is we have an actor who has to learn the electric guitar and that’s no easy task. How did you do the casting of Rosetta?

KENNETH: When you hear her [Carrie Compere, who plays Rosetta], you’ll think she’s been playing guitar for decades. I’ve heard so much about her, but it’s visceral, the love that she has and the power. Not that Rosetta didn’t have an edge, but there’s something about Carrie that is so instant, when that curtain goes up…you can’t buy that.

CHERYL: During auditions in New York…I remember leaning over at the table and said, “Let’s see what she does with Rosetta.” I remember saying “This is a woman who when she walks into the room, she walks in with her history.” Something about that felt exciting to write toward. That’s what I remember from her audition, and she has never let me down. She’s a combination of grace, warmth and an incredible sense of humor. Particularly with this character, she wants to connect to that audience. Carrie, when we were in Seattle, she would go backstage, take off her costume, come out to the lobby and take pictures and autographs with the audience. We had so many repeat visitors. I credit her for her ability to connect.

FORD’S THEATRE: What makes this new work about a trailblazer like Sister Rosetta Tharpe different? For a work that is not as known that we have the responsibility to tell and excite new generations with, what’s exciting for new generations?

KENNETH: If they like Bonnie Raitt, a musician who everyone respects, they can see where Bonnie Raitt came from. Eric Clapton. Whatever it is about those musicians that you know and like about. You don’t have to know her – but know what she did. You can be one of the first people to discover her – you can say “I was there.” That’s the opportunity with theatre written for these folks, it’s authentic. There’s some realness in here that you can discover. People who are giants of the industry really say that who ultimately inspired them or who made them who they are is Sister Rosetta Tharpe.

CHERYL: This is a musical that has a couple genres of music. You’re going to hear a little bit of jazz, some stomp-down gospel, she rocks out. So, I think that some people will come and be excited just to hear music. A while ago, I had to have a minor medical surgeon, who’d seen Fanny: The Music and Life of Fannie Lou Hamer, and he said “You know my favorite show the Rep had ever done? SHOUT SISTER SHOUT! I couldn’t wait to get out there and look up this woman.” Someone so far away from theatre to be excited. Something I never thought a surgeon would be excited about. I think it’s because of that good, good feeling that you get from hearing good music and a good story that you get out of the theater, want to sing, greet someone. That great energy that comes offstage into the audience. They take out that good feeling: “I’ve been part of a community tonight.” Always lead with “this was the godmother of rock and roll.” A Black woman was the godmother of rock and roll? Always get that into the conversation.

Daniella Ignacio is the Communications Manager at Ford’s Theatre. Learn more about her at www.daniellaignacio.com. 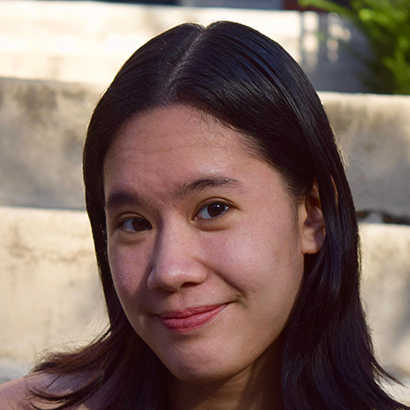 Daniella Ignacio is the Communications Manager at Ford's Theatre