How Have People Remembered Lincoln?

Today, many Americans see Abraham Lincoln as one of the country’s national heroes. But over the decades since his death, people have debated the meaning of his legacy. Explore these debates, past and present, below.

“We are able to create a Lincoln for all seasons.”

Lincoln’s assassination left a lasting impact on this country and it is still felt today. How is his legacy represented?

Each generation since his death has found new aspects of the man and myth to emphasize. Lincoln’s deeds and words shaped one of the most crucial periods in U.S. history. People around the globe, both past, and present, take heart in Lincoln’s leadership and thought. Still, others see Lincoln as representing the worst of presidential leadership.

His impact on American society and culture can be seen all around us in symbols and memorials, currency, and advertising.

Conduct Your Own Investigation

As you see how different people around the globe remember President Lincoln, consider… The Lincoln National Monument Association dedicated the country’s first statue of Lincoln in 1868. Sculptor Lot Flannery’s statue, emphasizing Lincoln as Savior of the Union, still stands in front of the D.C. Circuit Court of Appeals in Washington. Photo by Matthew G. Bisanz via Wikimedia Commons. Henry Fonda, who starred in Young Mr. Lincoln in 1939, was among the many actors who have portrayed Lincoln on film since the first movie about the 16th president appeared in 1911. Image via Wikimedia Commons. Opened in 1932, the Arlington Memorial Bridge is a major artery over the Potomac River, a physical and symbolic divider of the “North” and the “South.” Library of Congress, LC-DIG-hec-38178. In 1922, those who planned the Lincoln Memorial on the National Mall thought of it as a spot to showcase post-Civil War reconciliation. The memorial has since been the site of protests on issues like war and peace and racial justice. Photo by TJH2018 via Wikimedia Commons. In the early 1900s, private groups built highways across the United States. Automobile entrepreneur Carl G. Fisher planned the Lincoln Highway, running from New York to San Francisco, as a living memorial to his personal hero. Photo by David Monack via Wikimedia Commons. Before 1909, most people were against using portraits on coins in the United States, but public sentiment at the 100th anniversary of Lincoln’s birth upended the long-standing tradition. Image by Lost Dutchman Rare Coins via Wikimedia Commons. After Lincoln’s assassination, a group of formerly enslaved people raised funds to erect a statue of Lincoln. The Western Sanitary Commission, a mostly white group that took charge of the funds, rejected this design by Harriet Hosmer in 1868. Image from Art Journal, 1868, courtesy Getty Rsch Inst. Etching of an elaborate stone monument. A square pedestal with four steps across it includes four standing African American male figures, one at each corner. The next level contains another square platform, with a standing figure of a woman at each corner.

In 1869, Nebraska Territorial Senator J.N.H. Patrick tried to foil the new state’s plan for a new, custom-built capital city by naming it after Lincoln in an area where many had been sympathetic to the Confederate cause. His plan failed. Hanyou23 via Wikimedia Commons.

Until 2003, Richmond, Virginia had no statues of Lincoln; statues of Confederate leaders predominated. This statue of Abraham and Tad Lincoln, commemorating their visit after the U.S. Army captured the city in April 1865, sits near the Tredegar Iron Works. Photo by David McKenzie. After years of restoration, President Lincoln’s Cottage—where he and his family spent summer months—opened as a historic site in Washington, D.C., in 2008. The site joined many other places preserved because of their associations with Lincoln. Photo by Carol Highsmith; Library of Congress.

The Emancipation Memorial in Lincoln Park can be an uncomfortable depiction of Abraham Lincoln for many us. But by examining it as a historical artifact we can reveal layers of meaning and give nuance to a significant memorial to Abraham Lincoln, the Great Emancipator. 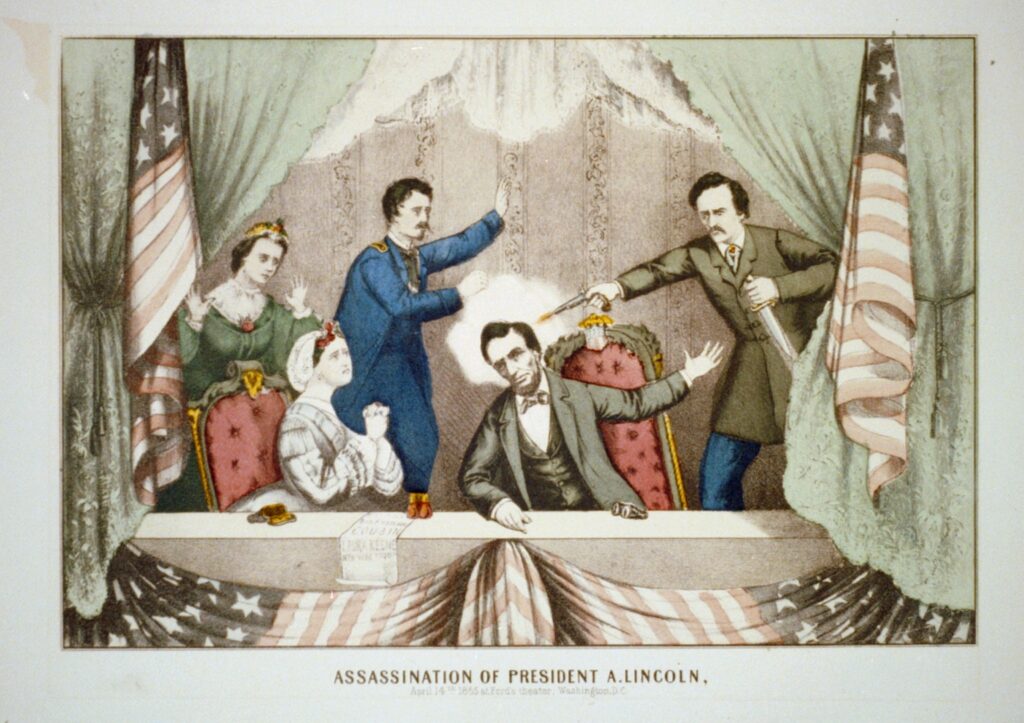 On the morning of April 14, 1865 (Good Friday), actor John Wilkes Booth learned President Abraham Lincoln would attend a performance of the comedy Our American Cousin that night at Ford’s Theatre—a theatre Booth frequently performed at. He realized his moment had arrived.

Impact on a Nation

How did people react to Lincoln's assassination in 1865?

With the relatively new technology of the telegraph, news of Abraham Lincoln’s assassination spread quickly across the United States and beyond.

Are you looking to teach the Lincoln assassination?

We offer ready-to-use history lesson plans focused on how to teach President Abraham Lincoln’s assassination and the Civil War.

Give to Ford's Theatre and help us share the stories that shaped a nation.